Spaces Kansas City Magazine Features Our Project: One More Thing- Before & After

Spaces Kansas City Magazine Features Our Project: One More Thing- Before & After

As a Greater Kansas City interior designer, it is such an honor to have one of my recent projects showcased on TEN PAGES of the March 2016 publication of Spaces KC! The team at Design Connection, Inc. would like to share our feature story with you:

One More Thing- Before & After

As is often the case when it comes to remodeling, homeowner Alan Emery thought he needed to do one small thing. As it turned out, the one small thing led to a complete renovation of his home. Fortunately, he enjoyed being along for the ride.

One night, standing around with friends in his kitchen, someone said, “You know, you should take out this wall. Everyone ends up in here and it would open the whole space up.” Emery agreed.

Then the project started to take on a life of its own. “I wanted to get rid of the popcorn ceilings,” he remembers. “I’ve done this sort of thing all my life and thought I could do it myself with input from my friends, but they thought I needed a professional for the project. Boy, were they right.”

Emery hired Brackmann Construction to handle the job. Suddenly, his contractor was asking him about cabinets and hardware and finishes. It became obvious that Emery could use a little help. Brackmann recommended a long-time collaborator, designer Arlene Ladegaard, a principal of the firm Design Connection.

“It’s a beautiful home on five acres,” says Ladegaard. “But not much had been done since he and his late wife bought the house in the ’70s.”

Ladegaard started with the kitchen. With stained-wood cabinets and solid-surface countertops, the space was generous, but dated and closed off.

As his friends predicted, removing the 20-foot wall changed the feel of the entire first floor.

Now a generous island with counter stools is a gathering spot for drinks and dinner. Crisp, white cabinets and sleek, stainless-steel appliances brighten up both view and viewpoint. “The biggest difference is my view,” says Emery. “Now I get to look out nine windows. It’s the best.”

But Emery and Ladegaard did not stop there. “Once we took down the wall and removed the cabinets in the kitchen, the maple molding in the rest of the house looked heavy. Alan and I agreed that all the trim should be painted white,” she says. The floors in the kitchen needed to be replaced as well and, as often happens, “While we’re at it….” kicked in. The pair decided to replace all the original floors.

“He had already selected the stainless surround for the fireplace. I love contemporary and I could see that we could make this space fresh and happy,” remembers Ladegaard. She followed her vision and showed Emery floor plans and furniture selections. A subtle, but masculine, palette of steel blue and white with accents of dark brown and black began to emerge. 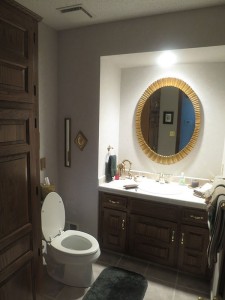 While friends tend to gather in the kitchen and living room, Ladegaard created a chic and comfortable place for more formal meals in the dining room. Generous blue velvet wing chairs provide the perfect spot to settle in. Accents of silver and crystal provide a bit, but not too much, sparkle for this bachelor.

Extending beyond the living areas, the renovation crept into the master bedroom and bath. Ladegaard removed carpeted steps that led to an inset tub and replaced it with a sleek free-standing model. Marble tile underfoot and a subtle metallic wallpaper bring the bathroom up to date. Ladegaard used wall-to-wall carpeting in the master bedroom and a tall, upholstered headboard in soothing neutrals creating a luxurious retreat.

“You could never be depressed here,” notes Ladegaard. “The house is flooded with light. Alan loves it. This renovation allowed him to stay in a home that he loved.”

Emery agrees. It’s certain that he, like all renovators, grew restless having workers in his house for five months, but he’s thrilled with the results.

“Really, it was pretty easy,” he says. “I did almost nothing. Arlene and her staff have been terrific.” In order to show his appreciation—and show off his home—Emery had his friends and Ladegaard and her husband to the house for a party during the holidays. They all agreed the renovation was a success.

“Now I just want to live long and enjoy it,” he says.